Archive for the tag “Boystown”

OUR RATING: Skip It!

Tacos. Tequila. Outdoor patio. This all sounds quite dandy, especially when D.S. Tequila Company serves up half-priced food on Mondays and All-you-can-eat tacos on Thursdays for ten bucks. But don’t let the specials fool you – this Lakeview taco/burger/tequila joint is not so special.

Adam: I understand, I’m spoiled. I like my food hot and good, my drinks cold and interesting and my ambiance beautiful and intoxicating. I’ve been to taco joints all over the city, and whereas Bullhead Cantina and Antique Taco stand out as highlights, D.S. Tequila Company might as well start with a different set of letters. Unfathomably small portions, and a taste that’s not much to write home about, you can certainly boycott this place to your heart’s content. 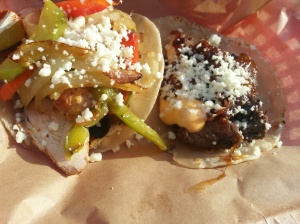 I started out with a chicken fajita taco. Simple is best, right? In this case, completely wrong. This grilled chicken was as dry as a bone, accompanied by a smattering of refried beans and queso fresco that was almost undetectable. I slathered on hot sauce because I would rather have my mouth burning like the Savannah than consigned to the dry depths of Death Valley. Next, sampling the steak taco with trepidation, I was slightly surprised. This taco is decent, but that may have more to do with the coffee spice rub than the steak. And at $3.89 for one measly sample size, you might as well go to a more upscale place and enjoy yourself a little.

As for sides, they are wildly disappointing. Jalapeno Slaw sounds really great, but when the mayonnaise overpowers even the slightest hint of jalapeno, I wonder why I am going to a Mexican restaurant at all, and not just buying slaw and dumping giardiniera on it at home. Trust me, the homemade recipe would be hotter.

Alicia: Being big into seafood, I was super excited to try some fish and shrimp tacos here. D.S. Tequila’s grilled fish taco served me alright, with jalapeno cole slaw and spicy aioli. There was plenty of sauce and a good amount of bite, but the mayonnaise in the coleslaw kind of drowned out the rest of the taco. Actually, coleslaw was most of the taco, with a frighteningly-small serving of grilled fish hidden somewhere in there.

With these lukewarm feelings I then attempted the tequila shrimp taco with red cabbage, pineapple salsa and spicy aioli. Sounds amazing, doesn’t it? Unfortunately, this taco was basically three pieces of shrimp in a corn tortilla with some raw red cabbage. Pineapple salsa? Spicy aioli? Pretty non-existent, and really just some diced pineapple. Tequila? Yeah…not sure that was in there either. 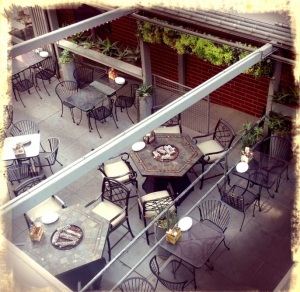 Ultimately, I found each of these tacos pretty underwhelming, with little to no love given to the food inside the tortillas, let alone the dry and boring tortillas themselves. I was even more disappointed with elote corn hash. The name sounds fun, but really I was just served a bowl of corn and some type of light cream with some crumbled queso fresco. It tasted like cream corn, but even less flavorful. It was pretty horrific, and gives elote a bad name. 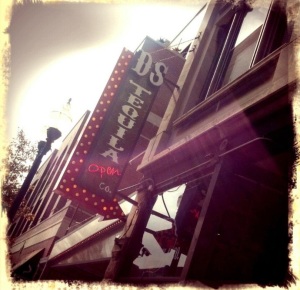 Final Thoughts: If we hadn’t been lucky enough to get in on this food on a Monday (i.e. we paid half-price), I think we would have been in an uproar to pay full price for what we got. With mediocre food, sub-par service, and a forgettable ambience, D.S. Tequila Company is definitely a place you can skip over if you want some good Mexican food. Sure, the outdoor patio is alright when the weather is nice, but a park bench will do you just as good.

OUR RATING: Do It!

“Life is a cabaret, old chum” and that’s exactly the feeling one gets when stepping inside this exclusive, classic and campy “supper” club. With a themed menu featuring the likes of the Mae West (Southern style fried chicken) and Joan Collins (stuffed portobello mushroom) and a liquor cabinet stocked with over 100 martinis (crazy things!), you can’t really go wrong here. And the food isn’t all that’s cooking… 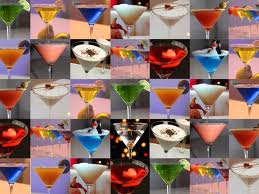 They also have projections of everything from black and white movies to (on some nights) Lady Gaga music videos – a plethora of themed-entertainment that changes on a nightly basis. And what Boystown event wouldn’t be complete with a few female impersonators? All in all, you get a completely fun filled and interactive experience unlike anywhere else in the city. 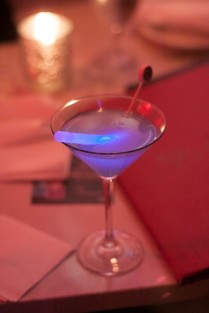 Adam: Storefront City has been wanting to try out Lakeview’s Kit Kat for a long time now, but due to the preposterously long lines on weekends, we had let it drop off our radar until we were invited to join the club to celebrate their 12 year anniversary by trying their new Gaga Martinis, based on the Lady herself, Hpnotiq and Pama. I wanted to try the Lady Gaga martini, for the singular reason that it included a glow stick. In fact, it turns out that you can ask for any of them with a glow stick, but we didn’t know that when we started. A sort of crazy combination of effen white, Hpnotiq liqueur, pineapple juice, triple sec, a glow stick and some rock candy. Actually, the drink wasn’t ridiculously sweet and was happily complemented by the candy. Never thought that combo would work–proven wrong every day!

We also tried an appetizer of their chicken satay, marinated in curry coconut and served with a peanut sauce. I’ve had a lot of satay, and this was alright, but I wouldn’t get it there again.

What really made the night was the fun of the place: flashing lights, upbeat music, nice people and an opportunity to see Gaga herself. Well, not really, but the impersonator did a pretty damn good job of it, and drew in the audience in an entertaining and fun way.

Alicia: I had such a blast at Kit Kat. I knew I would as soon as I saw that some of the martinis of the night were garnished with rock candy. Wait, and some of the martinis had flashing glow rings in them too? Gaga, divas, a super chic lounge, dessert martinis…I mean really! It’s no wonder why this is a Bachelorette party paradise. 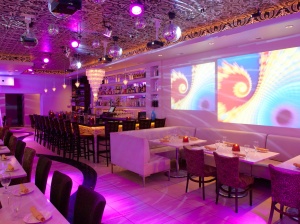 I ordered the Bad Romance, made with Effen Vodka, Apple Pucker liqueur, melon liqueur and pineapple juice (although, they have changed the components of this drink just recently). MUCH more tasty than the Lady Gaga. When the waiter brought the martini to the table I was super disappointed – no rock candy. But he was more than willing to return with a stick once I requested it. I was much too nostalgic not to indulge in one, and it really did add a unique sweetness to the drink.

Kit Kat has a great selection of drinks and food whether you want to go light (relatively skinny martinis and some yummy sounding vegetarian food) or go all out (dessert martinis and fried chicken…do those mix though?). We couldn’t help indulging a little further, so we decided to order their Samoan Girl Scout martini with vodka, coconut rum, crème de cacao, butterscotch liqueur and a dash of coconut cream. What was brought to our table was pure decadence laced with swirls of caramel and chocolate syrup. It sounds evil and delicious and trust us – it was.

My favorite part of the night, however, was by far the ambience laced with the tableside entertainer, who performed two songs every 20 minutes. Gaga had some drop dead looks, dance moves and get-up, and I really couldn’t get enough!

Final thoughts: Fast for a day to prepare for this place, and be ready for all Kit Kat will throw at you. Reservations are required, so we suggest you ‘telephone’ and hop on this bandwagon, especially on a weeknight when they have amazing specials. Kit Kat will be sure to tantalize all your senses and provide a crazy fun night, with some pretty dirty martinis.

P.S. For fun, check out Project LUSH, a Time Out Chicago sponsored ‘blog’ where three guys take on the whole Kit Kat martini menu, and live to tell the tale.